Welcome to my blog! I started it when I was a new Girl Scout leader and needed some kind of organized "to-do" list. I decided the best way to keep things organized was to start a blog. So here it is! My oldest troop has since bridged up to Juniors, and I've taken on a Daisy troop as well, so I will continue updating with new Juniors information and additional Daisy stuff too. My hope is to continue to update with every level as my troops advance. But we'll see.
Thanks for stopping by, and I hope it's helpful!

As with any Legacy badge, there are supposed to be five steps towards earning it. So we broke the Girl Scout Way one into two meetings, with two separate crafts and a game. This post details the first meeting. I'll post about the second meeting next.

Before the first meeting, I purchased colored plastic beads and some stretchy elastic cord. My youngest helped me separate the beads by color (no small task!). 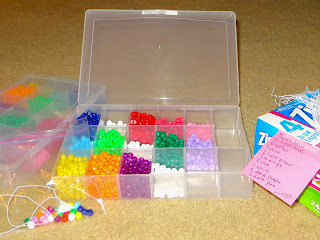 Then I made a list of the colors (based upon the Daisy petal colors), and experimented some with how many beads were needed to make a bracelet that would fit an average child-sized wrist. What we ended up with were three dark blue (for three aspects of Girl Scout Promise) then two of each Daisy petal color (for aspects of the Law, two of each because "one for how I treat myself; one for how I treat others"), and three white beads in to separate as we went, to reaffirm the three aspect of the Promise again.

You can do it however you like, though. That just ended up being easiest for me.

I made a list of the order for the colors, and then pulled out the correct number of beads, along with a pre-cut length of elastic, and put them into little Ziplocs, one for each child.

At the meeting (after our initial housekeeping tasks like the Pledge, snack, etc.), we taped one end of the elastic to the table (easier than trying to one end up, since the holes on the beads were big): 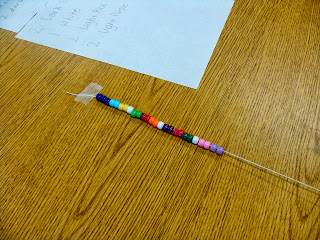 We provided sheets for them to reference on the table as well, for the right order.

But before we did the craft, while the girls were eating their snack, we talked about the Girl Scout Promise and Law. The point of this meeting (our second one -- the first was our Bridging Ceremony) was to review what we learned in Daisies. I made five points for discussion (going back to the five steps required for each badge in Brownies), and we multitasked during snack by talking about these:

1. What does "promise" mean? (Doing what you say you will do.) What are some examples of promising something? What are the consequences of keeping or breaking promises?

3. How important it is to live by the Law in how you treat yourself.

4. How important it is to try to live by the Law in how you treat others.

5. Pick an aspect of the Law that is challenging for you and strive to work on it between now and our next meeting.

Then we set up for the craft. The girls really enjoyed making their bracelets! The adult volunteers on hand were great and helped the girls with the beads and tying off the bracelets initially (most were able to tie them themselves).

After the girls were finished, we handed out notecards and colored pencils. We had each girl write on a card something she loves -- could be anything at all. But not to put their names on there.

Then we collected the cards, because they will be part of a later meeting (more info to come!).

By then it was time to go, so we packed up and headed out!

Thank you for visiting my blog! Please respect Girl Scout Privacy guidelines and do not leave any identifying information regarding a troop or its members, as this is a public site.

Also, I am happy to respond to comments posted on my blog, but I am unable to respond via personal email. This helps protect not only my own information, but that of my girls.

Anyone is welcome to use the templates I post here. I will always do my best to acknowledge my sources for any artwork or information I post, but I am human and may miss something along the way. Regardless, I strive to ensure that my blog's purpose and all its posts are in accordance with the Girl Scout Law in every way. The purpose of this blog is to assist new leaders based upon my own experience as a volunteer, and is not in any way intended to replace or subvert any information in official Girl Scout leadership training.